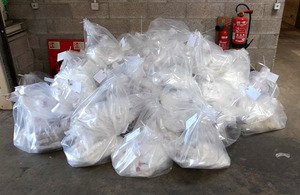 An estimated 250kg of cocaine and 169kg of amphetamine was discovered

Border Force has seized cocaine and amphetamines after stopping a lorry in Coquelles, the juxtaposed control for the Eurotunnel in France. The detection was made at about 11:10pm on Wednesday 29 July, after officers stopped the lorry which was on its way to the UK from the Netherlands.

The drugs were found hidden within a load of flowers.