The Intelligence Organization of the Islamic Revolutionary Guard Corps has smashed a large gang that was smuggling narcotics to Europe, IRIB reported on Sunday.

In this operation, 590 kilos of heroin, which were skillfully embedded in iron profiles and stored in a shed in the suburbs, were seized in the northwestern city of Tabriz.

Five members of the gang, who were involved in smuggling and transit of narcotics to Europe, have been arrested, three of whom are citizens of a neighboring foreign country and the rest are Iranian.

Naser Aslani, an official with the anti-narcotics police, said on Thursday that more than 43 tons of narcotics have been confiscated from smugglers across the country over the past two weeks.

Also, 939 vehicles and 30 weapons were confiscated as well, he stated, adding, meanwhile, a total of 12,992 culprits have been arrested in connection with plans implemented for dealing with drug trafficking.

Most recently, the police have disbanded two large smuggling gangs in the eastern province of Sistan-Baluchestan, discovering around 1.1 tons of narcotics. 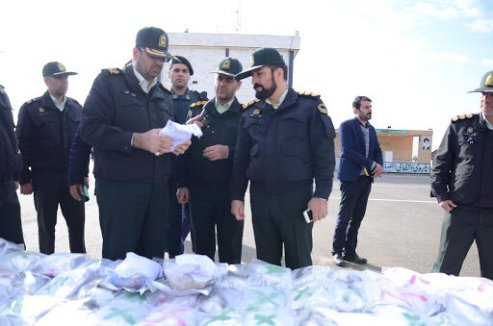